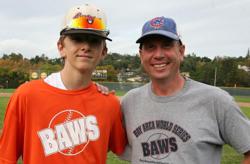 Hello and welcome to BAWS Underclass 2016!

BAWS Underclass is a fully underclassman showcase created for Northern California players, which began in 2013 at Cal Poly.  When you join a BAWS event (created in 2004), you are joining the longest running and most successful Northern California showcase organization in terms of players moving on to college baseball and most players drafted and certainly most players reaching the Big Leagues (up to 25 currently!).  Those are indisputable facts.

Additionally, as I do not run travel teams, summer coaches can feel secure in sending their players to BAWS and not having them "poached" by another program.  BAWS exists to support the players, HS programs, and summer/travel programs.

Thank your for the great BAWS event in Santa Clara last month.  You are a terrific host and we are so thankful to have been invited the last two years.  Your baseball reputation, broadcasting publicity of local talent and trusted national following led to Beau being selected to represent the Northwest Region at the USA Baseball National Team Series this past week in Cary, NC. What an experience!

He made the most of the opportunity and expanded his baseball family to include talented players from all over the country, with bonds and connections that will last a lifetime.

I don't believe he would have had the opportunity to compete at a national team event this summer without your marketing, tweets, broadcasts and sincere love of pushing local Bay Area talent to the next level.  We will forever be grateful to you and the BAWS organization.