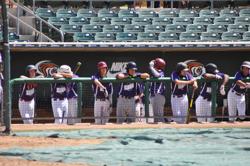 Though there weren't a lot of colleges in attendance, we had some good local schools represented.  Additionally, I am followed by nearly 700 people on Twitter and MANY of them are college coaches who received all my tweets during the event.  Even if you aren't seen by a school, if they are following me, then they know about the players who stood out to me during the event.