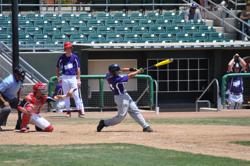 Whenever a "top prospect" list or ranking gets published there are always people who disagree or see things differently.  Trust me, for years I worked for Team One and Perfect Game and had to rank the best players not only from events but I had to do national rankings.  That being said, any list I put together is simply a group of players I would feel strongly about when talking to a college coach who wasn't at the event.  I look for tools, body types that project to a higher level of the game, arm actions, feel of the game, playability with the tools, game skills, all of it.  Not every player is the same type of prospect either.  So here is the list, done alphabetically.  Since I am talking about players as they project for college, grades can keep a player off this list.

You could win VIP tickets to the 2022 Premier League Mornings Live Fan Fest in Philly!HOW TO ENTER