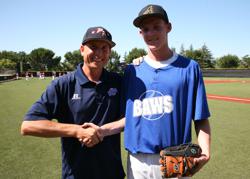 Reports for the East team at BAWS Underclass can be found in the roster, with each individual player having his own link.  The ratings and reports were arrived at after watching each player over two days and considering their present day abilities, size, strength, skills, potential for growth, and yes, some performance also is considered.  A BC Rating grade is not a guarantee of a player's future success or a limit on a players future potential.  That grade is simply a reflection of the opinion of the evaluator (a former MLB catcher, D1 head coach & minor league manager) as each player relates to the D1 level of the game.